Rev. David Elkins was the brother of my 4th great grandfather (John H. Elkins) on my father’s side of my family tree. David was born about 1779 in Montgomery County, Virginia, where most of my father’s ancestors lived for generations.

Around the year 1800, when he was about 21, David Elkins left home, traveling westward through the Cumberland Gap, to Green County, Kentucky and became a Methodist Circuit Preacher. “The minute book of the South Fork Baptist Church [in Kentucky] which is still extant, shows him to have been associated with that congregation. An order of April 4, 1812, reads: “Brother Jesse Friend appointed to go and see Brother Elkin and request him to come and see us.” Jesse Friend was an uncle of Nancy Hanks Lincoln. Another order on the fourth Saturday in March implies that Elkin was then their pastor. This church was within two miles of the birthplace of Abraham Lincoln.”

Rev. Elkins was reportedly strongly anti-slavery and that his sermons influenced the Lincoln family’s early attitudes.

Lincoln’s parents also instilled something of their views about slavery into young Abraham. South Fork Baptist Church, believed to be the first church established in what is now LaRue County, was founded in 1782 about two miles from the Sinking Spring Farm. The congregation’s founder and his successor, Rev. William Downs, were strongly anti-slavery, but much of the congregation was not. Many of the members, who opposed slavery, including Thomas and Nancy Lincoln, left the congregation in 1808. After Downs was found “to be in disorder” and the congregation voted “not to invite him to preach” for his anti-slavery views, he helped organize the Little Mount Baptist Church about three miles north of Hodgenville. Both Thomas and Nancy Lincoln were active members of the congregation. The Rev. Elkins also served as pastor for the congregation. Like Downs, he was a strong advocate of emancipation. Both of these men visited the Lincoln home at Knob Creek.

Rev. Elkins is also claimed to have influenced Abe even further:

In those primitive times, preaching was usually had under the trees or in the cabins of those few who were so fortunate as to have a bigger roof than most of their neighbors. Lincoln was a full-grown lad when he first saw a church, and it was only from the lips of wandering preachers, devoted men of God, that he heard the words of Christian doctrine, reproof, and admonition. At long intervals, Parson Elkin, a Baptist preacher, took his way through the region in which the Lincolns lived, and young Abraham, fascinated by hearing long discourses fall from the lips of the speaker, apparently without any previous study or preparation, never failed to travel far, if necessary, to attend on his simple services. The boy’s first notion of public speaking were taken from the itinerant, and, years afterwards, the President referred to the preacher as the most wonderful man known to his boyish experience. (Abraham Lincoln and the Downfall of American Slavery by Noah Brooks)

The Lincoln family moved to Spencer County, Indiana in 1816 when Abe was about 7. In October 1818 Abraham’s mother Nancy Hanks Lincoln died of “milk fever.”

While many agree Rev. Elkins did hold a memorial service at her grave in the Spring of 1819, there are numerous stories about how it came to be.

Several stories claim that 9-year-old Abraham wrote to Parson Elkins asking him to come, and describe quite a dramatic scene of Rev. Elkins riding 100 miles on horseback from Kentucky to Spencer County and preaching Nancy Lincoln’s memorial service to as many as 200 people.

Lincoln’s love for his gentle mother, and his grief over her untimely death, is a touching story. Attacked by a fatal disease, the life of Nancy Hanks wasted slowly away. Day after day her son sat by her bed reading to her such portions of the Bible as she desired to hear. At intervals she talked to him, urging him to walk in the paths of honor, goodness, and truth. At last she found rest, and her son gave way to grief that could not be controlled. In an opening in the timber, a short distance from the cabin, sympathizing friends and neighbors laid her body away and offered sincere prayers above her grave. The simple service did not seem to the son adequate tribute to the memory of the beloved mother whose loss he so sorely felt, but no minister could be procured at the time to preach a funeral sermon. In the spring, however, Abraham Lincoln, then a lad of ten, wrote to Elder Elkin, who had lived near them in Kentucky, begging that he would come and preach a sermon above his mother’s grave, and adding that by granting this request he would confer a lasting favor upon his father, his sister, and himself. Although it involved a journey of more than a hundred miles on horseback, the good man cheerfully complied. Once more the neighbors and friends gathered about the grave of Nancy Hanks, and her son found comfort in their sympathy and their presence. (The Everyday Life of Abraham Lincoln by Francis Fischer Browne, 1887)

It was the custom of those days, and of that country, to have a funeral sermon preached by way of memorial, any time within the year following the death of a person. So, as soon as the good mother was buried, Abraham Lincoln composed what he used to say was his first letter, and addressed it to Parson Elkin, the Kentucky Baptist preacher who had sometimes tarried with the Lincolns in their humble home in Kentucky. It was a great favor to ask of the good man; for his journey to preach a sermon over the grave of Nancy Lincoln would take him one hundred miles or more, far from his customary “stamping ground.” But, in due time, Abraham received an answer to his letter, and the parson promised to come when his calls of duty led him near the Indiana line.

Early in the following summer, when the trees were the greenest and the forest was most beautiful, the preacher came on his errand of kindness. It was a bright and sunny Sabbath morn­ing, when, due notice having been sent around through all the region, men, women and children gathered from far and near to hear the funeral sermon of Nancy Lincoln. There was the hardy forest ranger, come from his far-wandering quests to hear. There were farmers and their families, borne hither in rude and homemade carts, new-comers, some of them, and homesick for their distant birthplaces. Two hundred of them, all told, some on foot and some on horseback, and others drawn in ox-carts. All were intent on the great event of the season-the preaching of Nancy Lincoln’s funeral sermon.

The waiting congregation was grouped around on “down trees,” stumps and knots of bunch-grass, or on wagon tongues, waiting for the coming of the little procession. The preacher led the way from the Lincoln cabin, followed by Thomas Lincoln, his son Abraham, his daughter Sarah and . . . Dennis Hanks, bereft of father and mother, and now a member of the Lincoln household. Tears shone on the sun-browned cheeks of the silent settlers as the good preacher told of the virtues and the patiently borne sufferings of the departed mother of Abraham Lincoln. And every head was bowed in reverential solemnity as he lifted up his voice in prayer for the motherless children and the widowed man. To Abraham, listening as he did to the last words that should be said over the grave of his mother, this was a very memorable occasion. He had fulfilled a pious duty in bringing the preacher to the place where she was laid, and as the words, wonderful to him, dropped from the speaker’s lips, he felt that this was the end, at least, of a lovely and gentle life. He might be drawn into busy and trying scenes hereafter, and he might have many and mighty cares laid on him, but that scene in the forest by the lonely grave of his mother was never to be forgotten. (Abraham Lincoln and the Downfall of American Slavery, Noah Brooks)

J. Edward Murr asserted that he had “many affidavits from ministers, farmers, parishioners and near neighbors of Parson Elkins who state that they heard him say both from the pulpit as well as in fire-side conversations that he received the letter from Abe Lincoln and did ride horseback through the wilderness to preach the funeral sermon of Nancy Hanks Lincoln.”

Another story seems a little more likely: “Abe helped his father construct a coffin, a melancholy task that Thomas had performed often that season. Nancy’s body was conveyed on a home-made sled to a gravesite near the cabin, where Betsy and Thomas Sparrow already lay buried. No tombstone marked her final resting place, and no preacher delivered a funeral sermon until months later, when David Elkins arrived from Kentucky and spoke to a group of about twenty mourners gathered at the grave.” Many Lincoln biographies do mention a sometimes nameless preacher passing through. Elkins was an itinerant preacher, so the story could well be true.

“Preacher Elkins entered the Pigeon Creek-Buck Horn Valley community riding a sorrel horse and smoking a pipe. He had ridden a hundred miles across Kentucky’s open country and through Indiana’s wilderness. Now past forty and weighing two hundred pounds, Dave Elkins didn’t pay much attention to the appearance of his long, red hair and longer red whiskers. In his youth he was so wild he had been nicknamed Devil Dave. He had been a rip-roaring fiddler and a hearty whiskey drinker. People said he could lick his weight in wildcats and never bat an eye. He couldn’t read, but recognized the letter “O” because it was round. At twenty-two he “got religion.” Devil Dave took up preaching and you could hear him for a quarter of a mile, according to Dennis Hanks.”

And yet another just says that Rev. Elkins was visiting two of his sons who lived in Indiana at the time.

Lincoln himself apparently never wrote about her death himself, so all these stories came from others.

I do have another (verified) connection to Rev. Elkins and Lincoln – on the other side of my family, or rather in Spencer County, Indiana where my Hanning ancestors on my mother’s side of my tree settled in Santa Claus, just a few miles from the Lincoln homestead and Nancy Hanks Lincoln’s grave. Also, David Elkins married his wife Elizabeth in nearby Vanderburgh County, Indiana (Evansville) where many of my Hanning ancestors lived for several generations. The Hannings settled in Spencer County in 1847, 10 years before David Elkins died in 1857 in Mitchell, only about 65 miles from Santa Claus. Lincoln became a celebrity in the area when he entered politics even before he became president because of his roots there, and apparently, so was Pastor Elkins, so it is very possible the Hannings heard about the celebrated pastor who spoke at Lincoln’s mother’s funeral enshrined in the romanticized Lincoln lore that has circulated for over 150 years. Rev. Elkins is frequently mentioned in tributes to Lincoln reprinted in newspapers, portraying Elkins as a mentor and close friend. He became revered along with everything else connected to Lincoln. School plays have even been written about the service over her grave, now topped with a massive marble stone tribute to which people make pilgrimages. 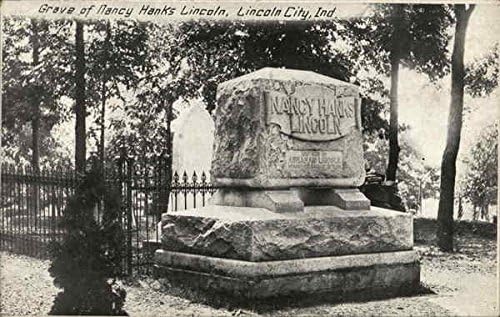 PDF LINK NOTE: Many of the files are large, so give it a moment to appear. When you click on a PDF link, it will open in a new browser window plus give you the option to download it.

Contact me for the password to access/download photos and to be invited to view the Ancestry.com tree.

Please help by editing captions. I’d love to add any photos you have.